In 1985 the idea of a Presbyterian Church in St. George was only a dream. From 1880 to 1949, Presbyterians had a presence in town. However, with the death of the mission teacher, Sara Louisa Conklin, in 1949, it seemed that Presbyterian work in the area had ended. A small chapel, constructed in 1901, was sold to the Roman Catholics in the 1950's. However, by 1985, the area was beginning to diversify and change. In that year, the Presbytery of Utah, under the direction of the Reverend Robert Rigstad, surveyed the area. They found that out of 326 homes surveyed, 19 were interested in the possibility of a Presbyterian church. 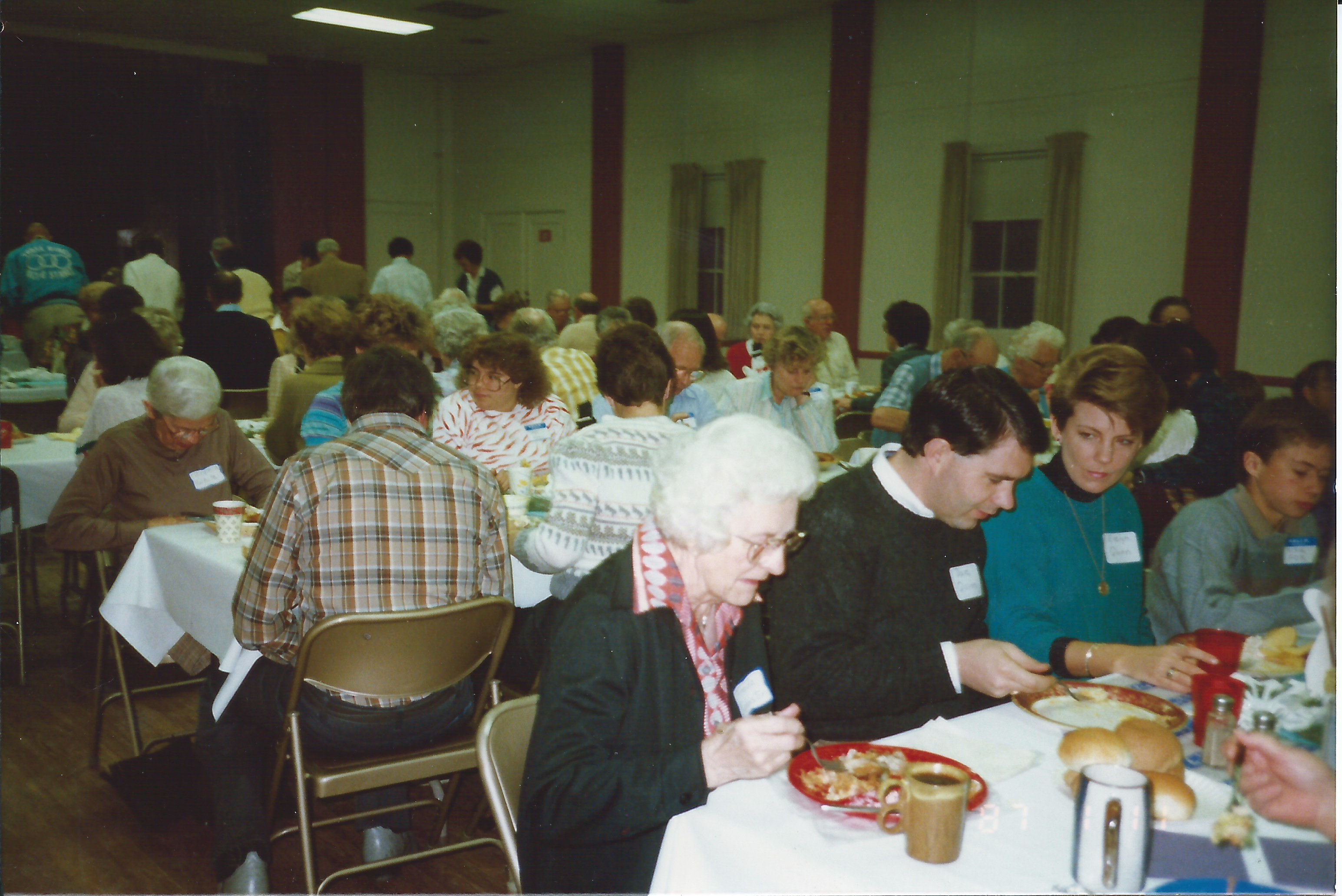 An Early Potluck at the Senior Center

A committee was organized in 1986 to propose a grant for a new church development in St. George and to call a pastor. This committee was composed of Deanna Cottam, Jennifer Jack, Janice Klein, Wilma Luke, Tom Noble, Virginia White, and Roger Hansen, chairperson. They met in the home of Roger and Katy Hansen. They advertised in the newspaper for anyone interested in a Presbyterian church. Nearly a hundred people showed up at the first potluck picnic in Worthen Park! As a result, several more monthly pot lucks were planned to be held in the St. George Senior Citizens Center. The committee envisioned a church of 300!

The Reverend Dr. John R Mahon, then pastor of The Presbyterian Church in Clatskanie, Oregon, was called to be the organizing pastor of the new church by the committee and Utah Presbytery in January of 1987. Dr. Mahon, a native of New Jersey and a graduate of Occidental College and the School of Theology at Claremont, had previously served as a chaplain in St. Joseph Hospital in Orange, California, and as a pastor in the Geneva Presbyterian Church in Modesto, California. He arrived in St. George in March, 1987. 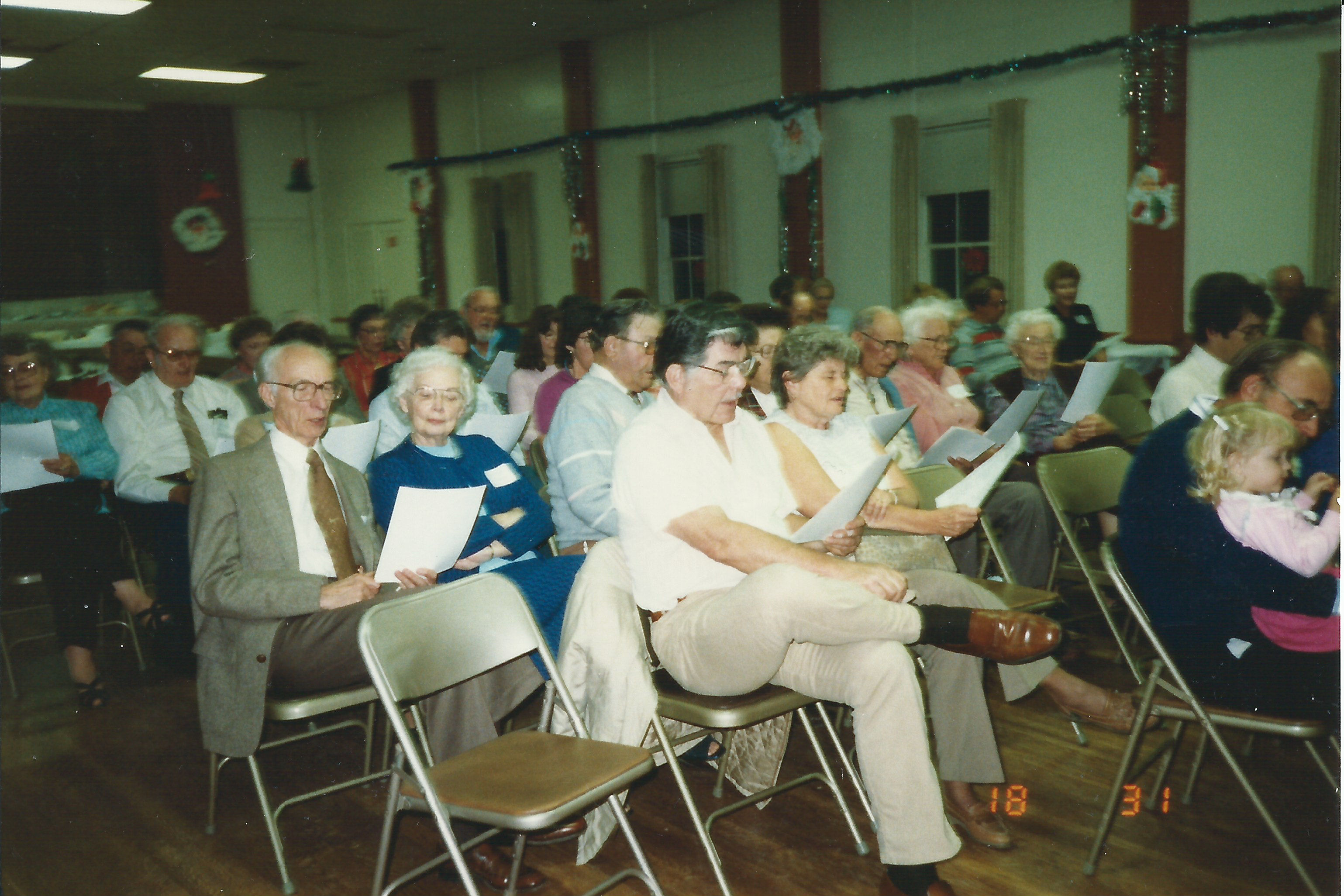 Worship at the Senior Center

The Pastor Nominating Committee became the steering committee for the new church. The first worship service, planned by the committee, was held in the St. George Senior Citizens Center on April 5th. The following Thursday, the new church began volunteer service at the Dixie Care & Share Food Bank. A newsletter was started. The first Vacation Bible School opened that July in cooperation with the Community Baptist Church with 26 students and a staff of 15. In September, a choir debuted under the direction of Katy Hansen and accompanied by Frances Ming. Also that September, the first Sunday School opened with 31 students, 10 adults, and a staff of 15. In November the women of the church held the first bazaar. Presbyterian Men was organized in 1991 with William Rutherford as coordinator. A bridge group was organized in 1992 by Dena Archer. Over the years, the fellowship of the church has been enriched by musical concerts, art fairs, and poetry readings.

Good Shepherd Presbyterian Church was officially chartered on April 10, 1988. The church welcomed 113 members on that night.

More than time and talent are needed to start a new church. Dollars are also needed. For the first four years, mission dollars from the national Presbyterian Church and Utah Presbytery were provided to get the new church started. Several congregations donated things like communion ware, hymnals, choir robes and nursery furniture. The Community Baptist Church in St. George donated $1,000 to the Building Fund! Tom Noble was the first treasurer in 1987, and served in that role until 2014. Good Shepherd became self-supporting in 1991!

Plans were begun to construct a building for the Good Shepherd Presbyterian Church in 1988. A Building Committee was formed and after several months of work, a design created by Paul Rauch was unveiled. A Building Fund campaign was organized in 1989 with a goal of raising $100,000 towards construction of a $350,000 building. 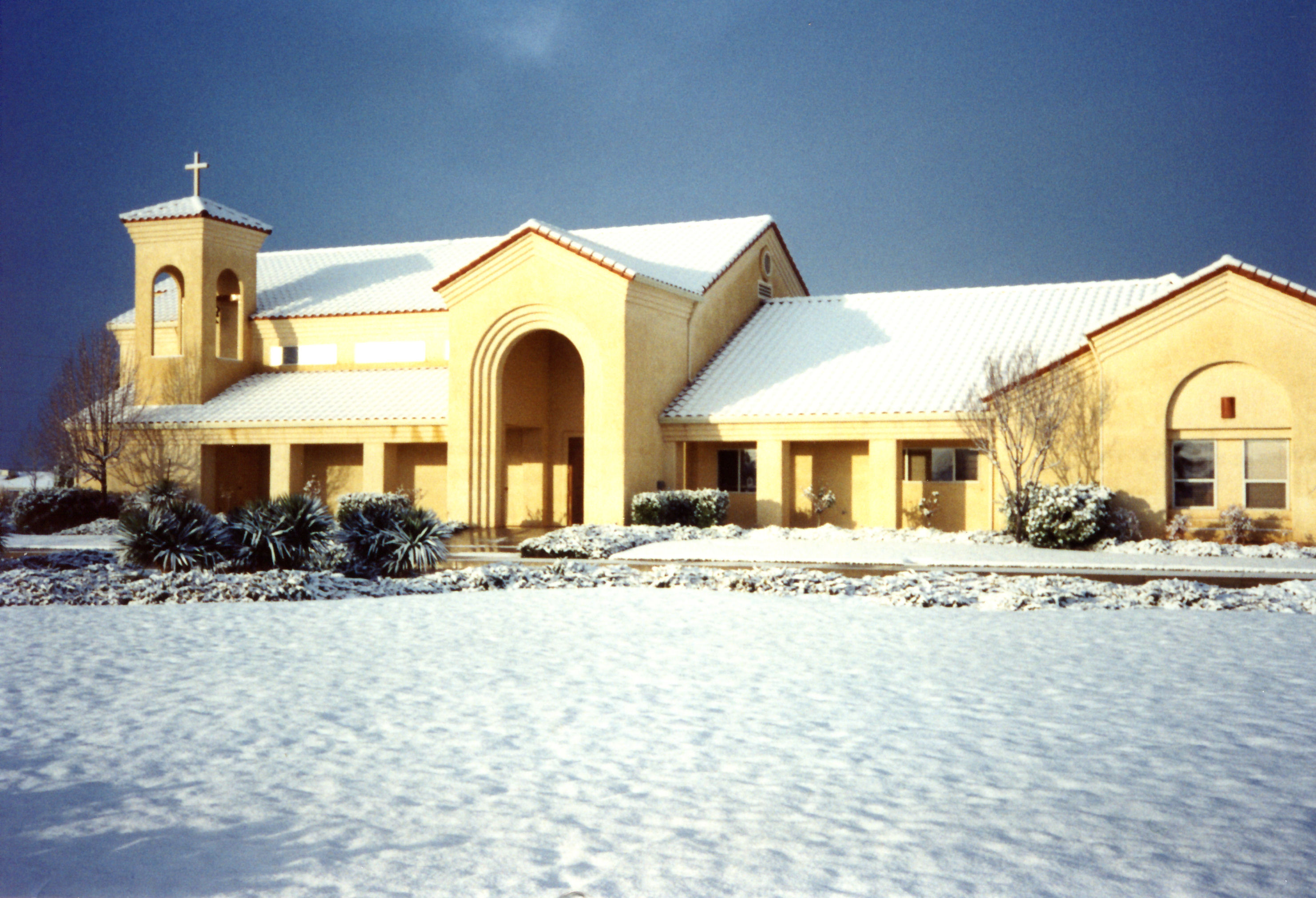 Good Shepherd in the Snow

Ground was broken on June 10, 1990 on four acres at 611 North 2450 East, purchased three years earlier by the Utah Presbytery for approximately $140,000. In December of that year, the congregation said goodbye to the Senior Citizens Center where they had been meeting for the previous four years, and moved into their new building which was financed through the national Presbyterian Church. On January 20, 1991, the new building was dedicated. Patricia Moore designed the Good Shepherd stained glass; Gary Morgan was the craftsman. An open house was held for the community, and Elder Bruce Stucki from the Church of Jesus Christ of Latter Day Saints gave a special prayer. The City of St. George presented the new building with the Mayor's (Karl Brooks) Award for Excellence.

With the opening of a new building, Good Shepherd grew by leaps and bounds. A second Sunday worship service was added in the Fall of 1991, and the congregation was divided into geographical parishes to foster closer fellowship. Paid, part-time staff soon followed to handle the new mid-sized congregation. Dr. Ronald Garner, professor of music at Dixie College, became choir director in 1992; Helen Pearson, church secretary in 1992, followed by Shirley Seefeld in 1994; and Sandy Safford, Director of Ministries in 1996.

Improvements to the building and grounds have been made throughout the years. 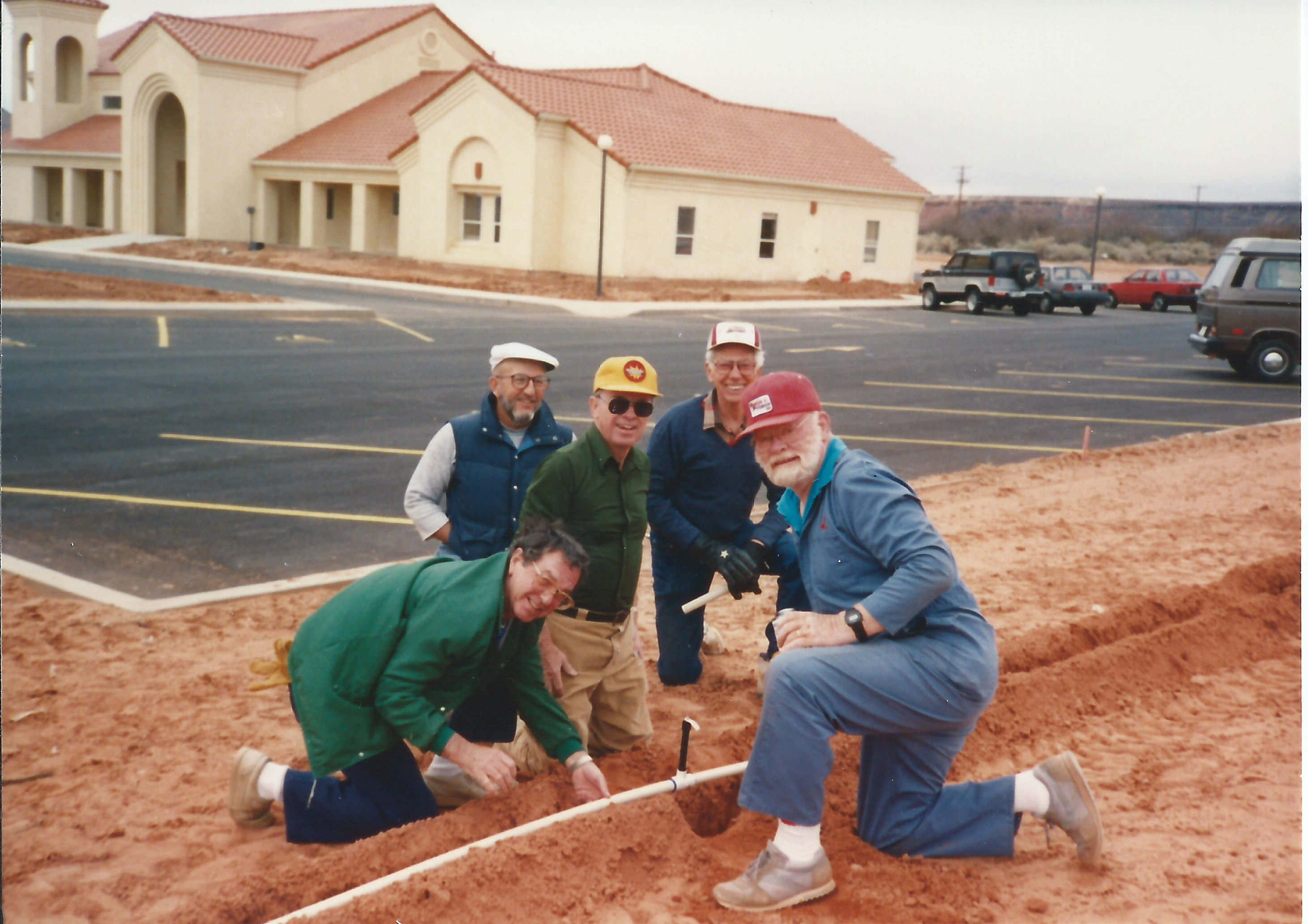 Original landscaping was all done by volunteer labor from the congregation. A memorial garden with a gazebo of the original steeple of the 1901 St. George Presbyterian Church was created in 1993. Six stained glass windows for the sanctuary were added in 1994; Pat Moore was the designer, Jim Summers, Bob Routh, and Jan Thompson were the crafts people. A second building campaign to retire the mortgage was started in 1992. The three year campaign was successful and the debt was retired. The mortgage was burned at the annual meeting in 1996, fifteen years ahead of schedule!

The church eventually outgrew the original sanctuary and, in 1999, the congregation decided to add additional space in the sanctuary and a Christian Education building in the back yard. The new building was dedicated on January 9, 2000. In keeping with the tradition, the loan for the construction was paid off years ahead of schedule.

Over the years, the congregation also outgrew the Fellowship Hall, which was originally designed with room dividers to facilitate its use as a Christian Education space. In 2012, the congregation voted to renovate and expand the Fellowship Hall, replace the original heating and cooling systems and add a new entrance to the narthex on the west side of the building. Construction began in the fall of 2012 and was completed in early March of 2013. Once again, the church has a mortgage and the hope is to pay it off early, as we have all of our previous mortgages. 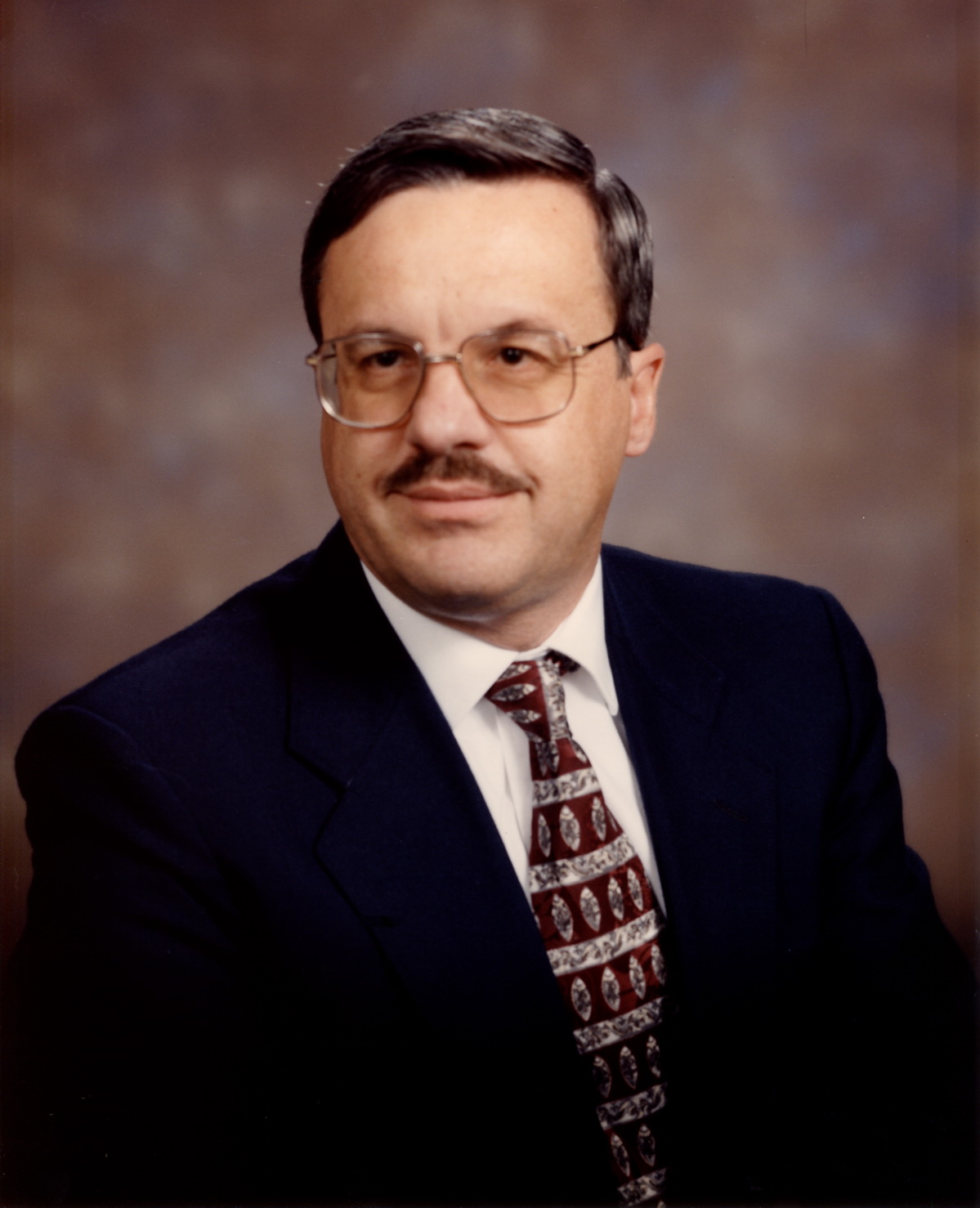 As noted earlier, Rev. John Mahon was called as the Founding Pastor of Good Shepherd Presbyterian Church in May of 1988. He served as our Pastor for more than twelve years until his departure in August of 2000. Paul Noble and Ed Kicklighter served as Parish Associates during his tenure and Rev. Harold Wylie replaced Ed Kicklighter in 1993. Rev. Wylie continues to serve as Parish Associate today.

After the departure of Rev. Mahon, two interim ministers, Arthur Bell and Jim Jensen served until 2001 when Jeff Baxter was installed as the second pastor of Good Shepherd Presbyterian Church. When Rev. Baxter left in 2003, David Crockett served as interim minister as the church searched for a new Pastor.

On November 1, 2005, Rev. Ralph Clingan was called as the third Pastor of Good Shepherd Presbyterian Church. He continues in that role today. Combining a keen sense of humor with an intimate knowledge of and outstanding ability to teach scripture, Rev. Ralph, as he is known to the congregation, leads one of the strongest churches in the Presbytery of Utah. In addition to his ministry and teaching, he also leads a twice-weekly exercise (torture?) session for our members. He is truly a blessing for our Congregation! 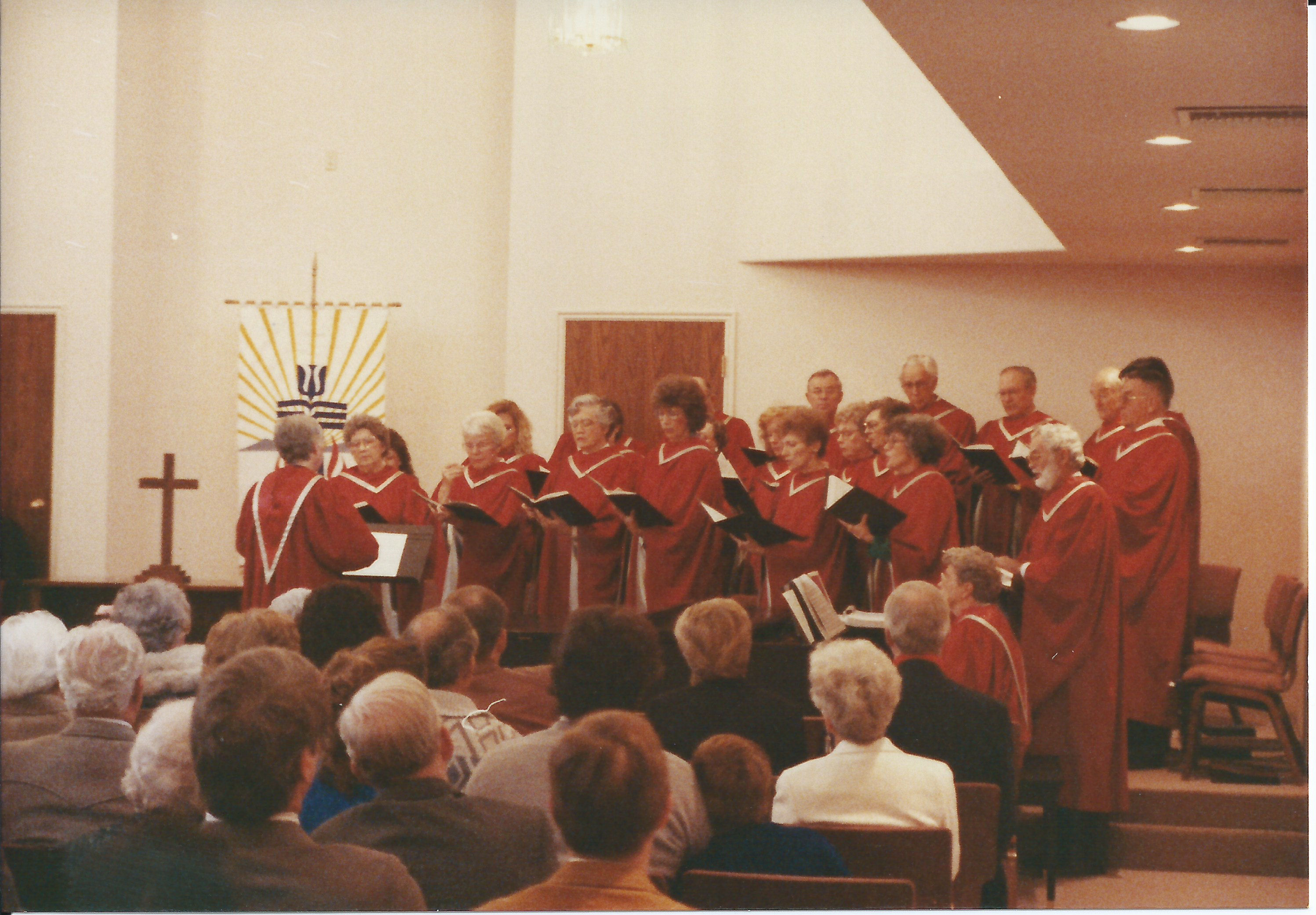 Chancel Choir at the Church Dedication

Quality music has been and is one of its chief features. A Hand Bell choir was organized by Dena Archer and debuted in 1994. Banners made their first appearance in 1995. 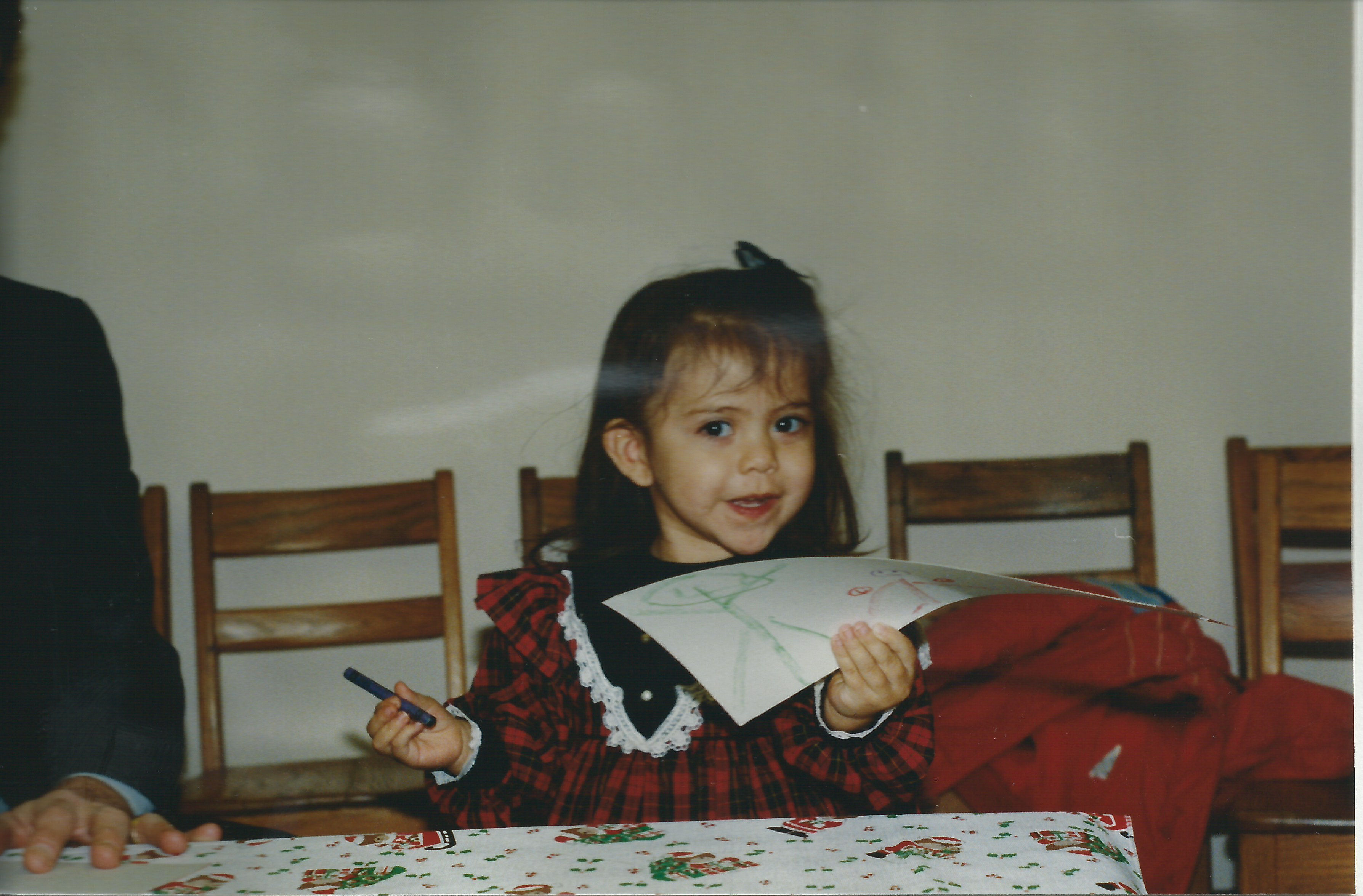 Education is the second distinguishing mark of Good Shepherd Presbyterian Church. Kay Small got the nursery off the ground in 1987. The first VBS staff included not only members of our congregation but, also, several ladies from the Community Baptist Church. Youth Fellowship and Confirmation Class began in 1989. The first Youth Sex Education class was held in 1988 with Dr. Vici Noble. Adult studies began in 1987; and the first Living in Utah class was held in 1988. A church library, organized by Carol Hanson and a group of ladies, debuted in 1992. Sandy Safford initiated Children's Worship Bulletins in 1996 and Children's Discovery Time and a Computer Lab in 1997. We continue to hold well-attended children's workshops today, even though the congregation includes very few children. 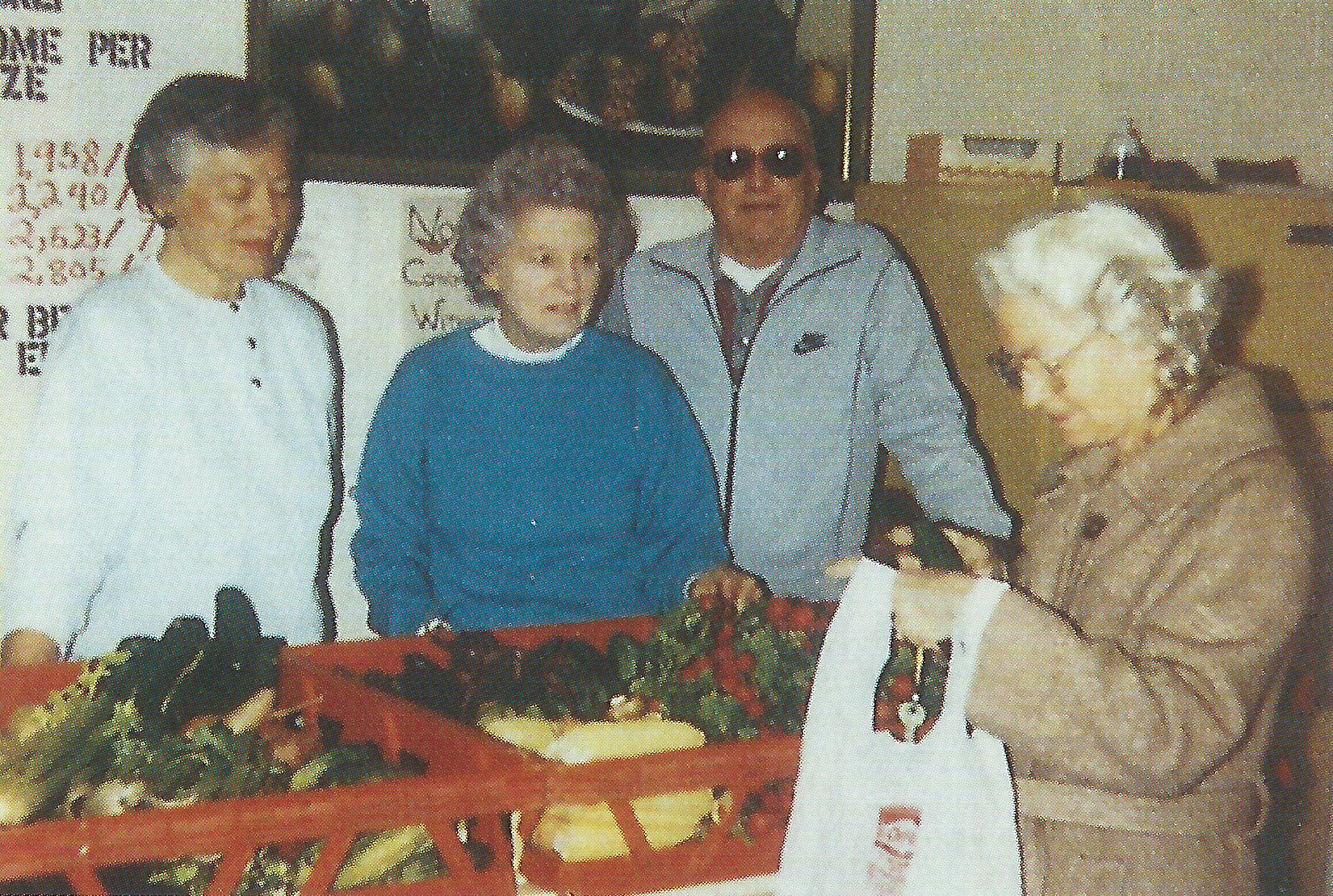 Community service is the third distinguishing mark of Good Shepherd Presbyterian Church. It began the same week as the first worship service with service at the Dixie Care & Share Food Bank. The Women's Inter-Faith League was begun in 1987 by Peggy Mahon who served as its first president, and Inter-Faith Boy Scout Troop #509 started in 1987 with John Mahon as Scoutmaster. Doris Moffitt served as a Volunteer in Mission at Sheldon Jackson College in Sitka, Alaska in 1991. The Youth constructed a Nature Trial to benefit Dixie College in 1992. Through the years, other projects in St. George have been added: Meals on Wheels (1992), Dove Center Women's Shelter (1993), Native American Tutoring (1994), Lights for Life (Dixie Health Care Foundation - 1994) as well as the Children's Justice Center and Habitat for Humanity. The Utah Statehood Centennial was celebrated in 1996 and Good Shepherd participated in two important ways. First, a bell, donated by Richard and Betty Smith, was hoisted and placed in the Bell Tower. When Utah became a state in 1896, the Presbyterian church bell and the Tabernacle bell rang in tandem for several hours; in 1996 this was recreated with other churches for several minutes. Secondly, the Chancel and Hand Bell Choirs performed at the Washington County Celebration for the Utah Statehood Centennial in the Dixie Center.

In 2012, the congregation voted to expand the existing Fellowship Hall, add a new entrance to the Narthex, and replace the heating and cooling systems in the original church building. Ground was broken on October 7, 2012.

In 2013, Good Shepherd celebrated its 25th Anniversary with an afternoon prayer service attended by church members and many people from the St. George community. The service was also an opportunity to dedicate the expanded Fellowship Hall to the memory of Sarah Louisa Conklin who was a Presbyterian missionary and kindergarten teacher in St. George from 1913 until her death in 1949.

The story of Good Shepherd Presbyterian Church is a story of people. Only some of the people and leaders involved are mentioned here. Actually, it would take reams to name them all. By the tenth anniversary of the founding of the church, 501 persons had been members of the congregation. On the twenty-fifth anniversary, the number is well over 700. Today, Good Shepherd Presbyterian Church's active members number over 250 with 19 of them from the original chartering. Called by Christ, they have formed a community of the love of God. They have sought to follow Christ, be an open and accepting community that shares a reasoned faith, a fellowship a person can call home, ecumenical in outlook, and a representative of Christ in the community.